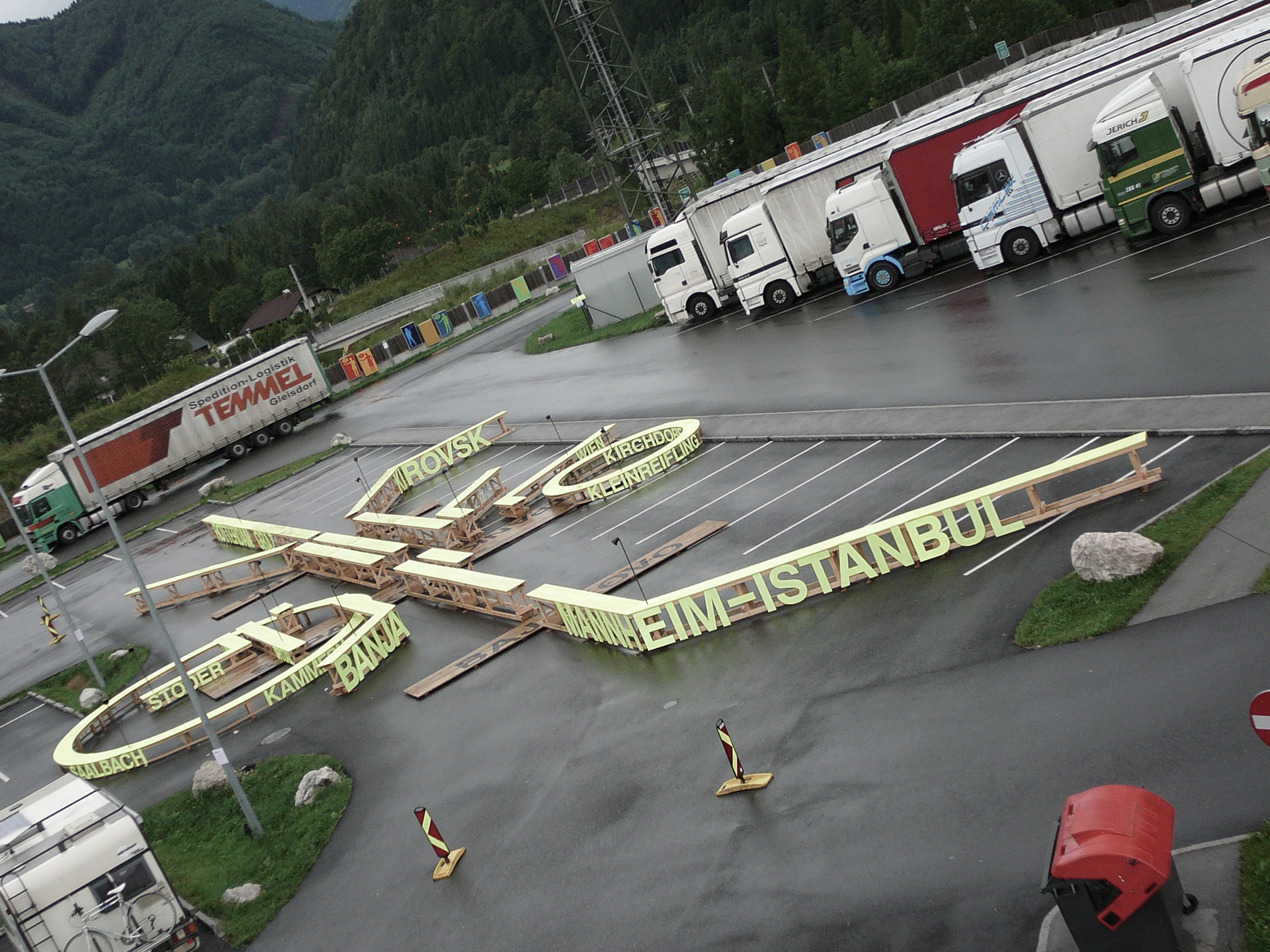 Stop and Go. Nodes of Transformation and Transition focuses its research on the transformation of the informal hubs, nodes and terminals at the “PAN-European corridors” in Eastern Europe and Vienna that emerged parallel to the increase in traffic volume after the fall of Communism and moreover their impact on the public realm at the margins and even in the core of the cities.

When increasing numbers of people are obliged to spend increasing amounts of time in transit, when their vehicles serve increasingly as a form of personal shelter or home, then transition nodes along their primary route – where exchange between the actors en route happens – acquire ever-greater significance. The alternative models of urbanism that ensue from the paradigmatic shift at these spaces, are shaped by polyrhythmic densifications and the continual performance of difference such as also increasingly inform our everyday lives.

In a first step of developments of informal nodes so-called “leakage currents” and “ant (flying) vendors” give rise to their spatial and social structures (Karl Schlögel, 2009). Where trade takes place exchange happens and difference arises. If we follow Henry Lefebvre’s thesis that urbanity is no more defined by density but by the degree of difference performed at specific places then these nodes paradigmatically represent new forms of urbanity (Henry Lefebvre, 2003). Many of these informal gathering places over time might have been transformed into more formal and controlled territories, and new ones might have appeared. Examples of such transformations have already reached the peripheries and cores of many middle European cities and have had an impact on the process of their urbanisation (Regina Bittner, 2007) by the reconfiguration of the urban fabric and its social life.

Although spaces in general are considered to be socially produced – no matter if they are de jure private or public property – the very same spaces can be at different times featureless non-places (Marc Augé 1992) or lived spaces, where only private concerns of a few individuals can be negotiated, or even a wider public might encounter for discussions. In previous research projects informal nodes – especially illegal markets were investigated – but just as single entities and at one specific timeslot only. What remained largely unexplored so far was emphasising on these nodes as polyrhythmic ensembles, linked to their temporal adaptability – reacting on daily, weekly and seasonal rhythms of traffic flows – as well as their interdependence of one another.

The (geo-political) position of Vienna concerning the corridors is of our particular interest: In Vienna three of the major PAN-European corridors are intersecting in its wider metropolitan region. Vienna is the meeting point of decision- and policymakers and the seat of headquarters of several private companies involved in planning and executing the expansion and upgrading of the (traffic) infrastructure in Eastern Europe, as well as the source and target destination of humans, goods, capital circulating via these nodes and employees regularly visiting them.

The points of departure for our research therefore are three nodes arranged in a triangle, one of its corners represented by Vienna, while the other two are located close to each end of the north-south axis of the PAN-European corridors where (post-socialist) transformation unfolded against different geo-political backdrops: in the border and port cities of Rousse/Giurgiu (BG/RO), and in Tallinn (EST). The clusters differ radically owing to their historical and current geo-political location, the quality and degree of their regulation by the state and legal formalisation, and the design of the hubs and nodes.

In the light of current political discourse in the West, which fosters fear of an invasion of cheap mobile labour and goods from the East, via these very corridors, it seems pertinent to show our dependence on such networks, by recalling the extent to which these “imports” underpin our living standards. A re-evaluation of dualistic discourse about the so-called East and West is also implicit in this focus on the nodes of mobility networks and the diverse range of mobility streams that pass through them. In the view of those multi-local social actors who work or stop at these nodes, the centre is increasingly far-removed from the (former) West, and the definition of centre and periphery increasingly needs to be challenged.

The project draws extensively on theories from interdisciplinary mobilities studies (Tim Cresswell 2011), in our case inspired by cultural anthropology, human geography and urban studies, and on mapping discourses, which, although fairly well established in the English-speaking world, are still under-represented in the German scientific community. By introducing this synthesis of theories and methods from interdisciplinary critical mobilities studies and performative or even immersive spatial strategies of research and representation drawn from artistic research practice, the project is likely to impact theoretical production and practice in a number of fields. In seeking to integrate highly contested or even seriously disputed art-based research in established scientific community discourse, the project consciously fosters a paradigm shift.