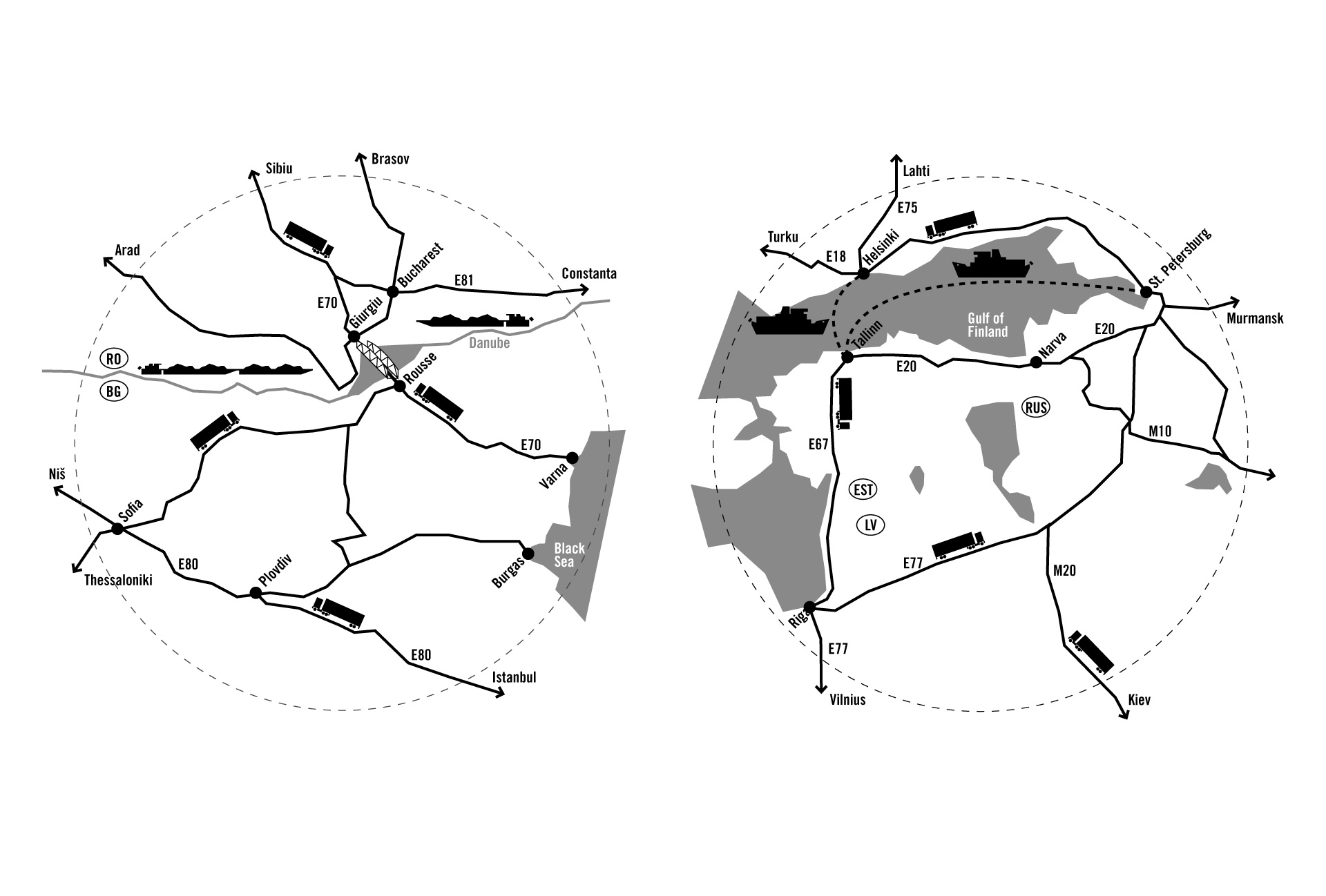 SYNTHESIS OF ART AND RESEARCH

While previous projects about related issues were investigated either from the qualitative research angle or through the lens of artistic production modes, we intend to combine both approaches. Accordingly, the goal of the project is to plot, on the basis of qualitative research at such intersections, a networked “cartography” of the routes, individual experiences and alternative forms of knowledge of mobile actors, then to transform this into a future-oriented meta-network of mobility flows, to which can be added at will fictional protagonists (and locations) who imbue the polyrhythmic ensembles of the network intersections, not only with everyday compulsions but also with utopian ideas. In effect, this will create a ‘road map’ or ‘manual’ for the communities en route, yet one sufficiently fictionalized to prevent their knowledge becoming accessible to the authorities, namely those who seek to regulate and sanction informal networks.

The media selected to develop this road map are documentary comics, pictograms, a graphically and conceptually organized glossary of en route artefacts, diagrams and models of the route networks and even on-site installations – all of which rely primarily on oral history and visual language. This reflects the communication forms found in our research field (signage), and, more importantly, can be easily read and understood by our international on-site informants and audience. The visual work is not a goal in itself however, but an important trigger to stimulate on-site feedback and knowledge production. The results will be combined with those from our Viennese lab, ultimately in book-form.

Several calls for new ‘mobile methods’ in social sciences were therefore raised recently (e.g. Büscher et al. 2010), methods that range from installing new Mobility labs at Universities [1] to the bodily immersion of the researcher in mobile activities, or for that matter, in moments of mobility-on-hold. They should even include cyber-ethnographies, following-the-thing, participant-observation on the move such as walk-alongs, drive-alongs, being ‘mobile-with’, mobile video ethnography and various phenomenological approaches, in addition to forms of mapping, visualization, future scenario building, action-research and even arts-based urban interventions – but up to now most of them remain nothing more than wishful thinking (Sheller 2011, 7).

LINKS AND REFERENCES TO THE ACTORS‘ NETWORK THEORY (ANT)

In this context the Actors’ Network Theory (ANT) approach – also quite influential and inspiring for most recent Mobilities studies – seems productive. Bruno Latour speaks of a “collective” (2000) comprised of human and non-human actors. He holds that “techno-social-semiotic” hybrids organise themselves in permanently shifting networks of actors, spaces, artefacts, objects, signs, norms, organisations, texts and so forth. Whenever new actors or artefacts become part of a network, all relationships and connections are altered. These are not static; they are entered into or forged, broken, transformed and fixed, in a myriad of ways. But what hitherto had been only a sociological theory calling for new methodologies, will be by combining actors and artefacts in visual representations and mappings transformed into an immersive praxis within our project.

For analysing the registers and expressions of urban spaces in transition, our research methods will build on the concept of “Ethnomethodology” (Harold Garfinkel 2002, Bruno Latour 2005). This concept aims by describing and explaining the behaviour of persons and involved things/objects to detect the patterned orderliness of social life in particular situations. Moreover this approach will be supplemented by the method of “thick description” (Clifford Geertz 1973) in order to understand the multi-layered contextual cultural practices and changing meanings of social interactions.

During our preliminary research and the workshops in Vienna as well as during our field trips we will, supported by our local partners in Rousse and Tallinn, conduct guideline-based biographical or episodic interviews. We therefore intend to invite the broadest possible spectrum of social actors to the workshops in our project space and get into contact with a variety of guests and employees directly at the selected terminals or question people more casually, then compile snippets of conversation and the biographical details they provide as fictionalized biographies that will be subsequently developed in short comic strips and audio sequences.

Artefacts will play a significant role within this process. [2] To note which artefacts people fall back on when in transit is a particularly interesting feature of these encounters: they drive an artefact, have loaded up artefacts, and even the terminal itself is defined in terms of a diverse range of artefacts. Moreover it is part of our strategy always to bring along some artefacts ourselves, in order to stimulate and provoke the interview partner, and so steer conversation towards the issues important to us.

The van we drive, with its inscriptions and foldaway information stand, and our network installations, based on preliminary research and designed before the trip, are the primary artefacts with which we draw attention and prompt spontaneous responses from potential interview partners. The secondary artefacts are our comic-style drawings, which we use to introduce serious issues relating to social, economic and political change. Even complete amateurs feel free to speak their mind, to question the issues in detail, or to talk about their own experiences. The comics are then redrawn to reflect the interviewees’ narratives and finally given to them as a small token of our appreciation. Both of these visual representations, our network installations and the comic-style drawings, are the basic tools for the guideline-based biographical or episodic interviews.

DISPLAY AND FIELD TRIPS IN A MOBILE LAB

During a period of preparation of our research-trips we will collect material about our three selected nodes in Vienna. To interconnect the material, we will set up a preliminary network installation at our Lab in Vienna. In the first workshop (WS I) where the project team, representatives and (former) employees of companies and NGO’s based in Vienna – who had been involved in the transformation of our selected routes and nodes – get together, we will present our findings. Subsequently we’ll integrate their brought in experiences, reactions and comments into our display and network installation.

After this workshop we will, in the project team – consisting of the urban designer Elena Dimitrova (BG), the geographer Tarmo Pikner (EST), the anthropologist Emiliya Karaboeva (BG) and us – verify the core research questions linked to the respective site. Subsequently afterwards we will start our first 30 days research-round-trip. Departing from Vienna we will drive to Rousse/Giurgiu, two border and port cities on the Danube, with the only bridge connecting Bulgaria and Romania, at the local branch of the biggest international logistic enterprise with Bulgarian roots: Willi Betz, a German company that bought out the former socialist state monopolist SO MAT. With the aid of the enterprise, we will follow the truckers’ routes to reach the next three important nodes, which attract several other social groups and individuals en route with different motives and modes of mobility – first in Rousse itself, but then also along the E 83 road to Sofia, the E 85 to Plovdiv, and the E70 to Bucharest. The latter two also intersect with the E 80 highway that connects Turkey with the former West. Departing from Rousse we will directly drive the way to the port of Tallinn and follow the mobility paths to Helsinki; along the E20 to the EU border between Estonia and Russia; along the E67 towards Riga, and then to Vilnius and Belarus, or Kaunas and Poland – back to Vienna.

While our first visits to each destination will be devoted to collect evidence and sharpen our core research questions at the nodes by investigating themselves – a small workshop (WS II and WS III) with local experts is envisaged, for example, organized in cooperation with our partner institutions – the goal of the second research-round-trip will be to install, on site and/or at an art institution [3] close to the node a new network diagram specifically designed for the location.

We will rent a large-capacity van or trailer for transport purposes, and also carry material and tools that allow the van to be instantly converted into a foldaway information stand for our documentary comics, maps based on real data or fictional narratives, and glossary of artefacts. Responses to the mobile lab and display will be documented (film, photos, sound, interviews) and collated, ultimately in book-form, but also in various exhibitions.

MAPPING – IN THE PROTECTED LAB AND INSTALLED ON SITE

Back home in our lab in Vienna, new research findings and material will be added to the archive or integrated in the webpage, and the overall project mapping brought up to date. We plan to then produce route network diagrams for each of our terminals, based both on autobiographical interviews made in situ and on consistent mapping of peoples’ routes via Google Maps. For each terminal we will depict, in abstract form, the paths followed by a maximum of twelve fictional characters that either pass through regularly, stopover for various reasons, or work there. These drawings clearly reference Harry Beck’s famous London Underground map of 1933, which was inspired by an electric circuit diagram. Depending on the availability of empirical information, the scale of the paths depicted in the diagram may change and be extended to isometric space-time paths or augmented by the representation of data. [4]

These two-dimensional diagrams will be translated later into 3-D models. Each installation will incorporate the broadcast of a built-in audio channel and/or the display of documentary comics showing condensed accounts of (fictional) characters’ experience. These personal narratives serve to juxtapose the macro-political knowledge represented by the aerial-view diagram and micro-political insights into individuals’ everyday lives – and, simultaneously, they offer acoustic stimuli that motivate visitors to move into and through the installation. [5]

The Stationary Laboratory (Project Space) is a permanently expanding archive with a solid collection of basic theoretical and methodological literature as well as documentary material covering exemplary projects by artists (other than ourselves), some of which will occasionally leave the archive and be integrated in various (very possibly expanded) exhibition formats. The room for the laboratory/project space will be provided by the Academy of Fine Arts Vienna and used first and foremost as a workspace for the core team, for the preparation of field trips (to “dislocated labs”) and the evaluation of material and findings thereby acquired. Experimentation with various display formats will serve to spotlight new focal points at each stage of the research. Thus instead of simply staging one meta-installation as a constitutive “frame” for our material – in which a public workshop might take place as an instance of reflection on research findings to date – our objective is to realise, test, change, and re-locate a range of settings appropriate to individual themes or locations. The equally diverse range of presentations, discussions and workshops organised in these settings, around specific issues and in the light of various methodologies, and the two interim exhibitions in January 2015 and 2016 would naturally be open to the public.

For evaluating the interim results of our research and the conversions into visual representations, we install an advisory board consisting of: Regina Bittner, cultural scientist and director of the Bauhaus Kolleg Dessau who has led several research studios which examined the re-configuration of public spaces; Karl Schlögel historian and author, professor at the Europa Universität Viadrina in Frankfurt Oder, teaches and publishes frequently on Eastern European history; human geographer Tim Cresswell teaches at the Royal Holloway University London and is a renowned expert in mobility studies; the social and cultural anthropologist Sabine Strasser, professor at the University Bern has her respective research focus in migration, transnational studies, multiculturalism, citizenship, feministic anthropology.