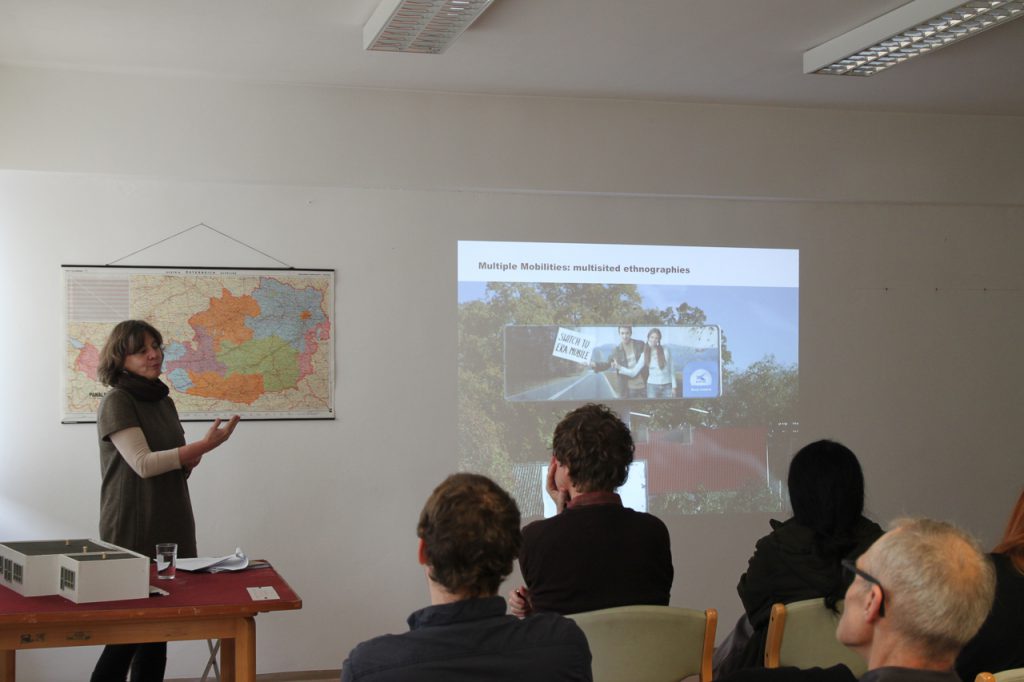 Lecture by Regina Bittner at Stop and Go project space located in a logistic hub at Vienna Nordwestbahnhof, December 2016 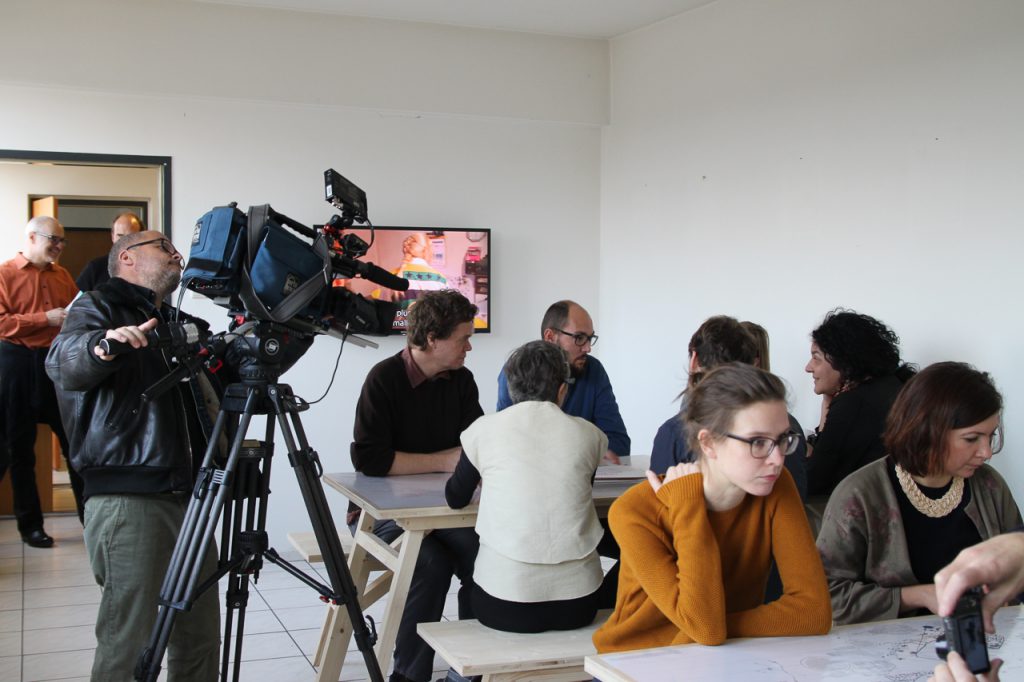 Lunch break in the former PANALPINA canteen: in the background a video about female Romanian labor migrants working in Italy, on top of the tables posters mapping the regime of forced migration in Austria, December 2016. 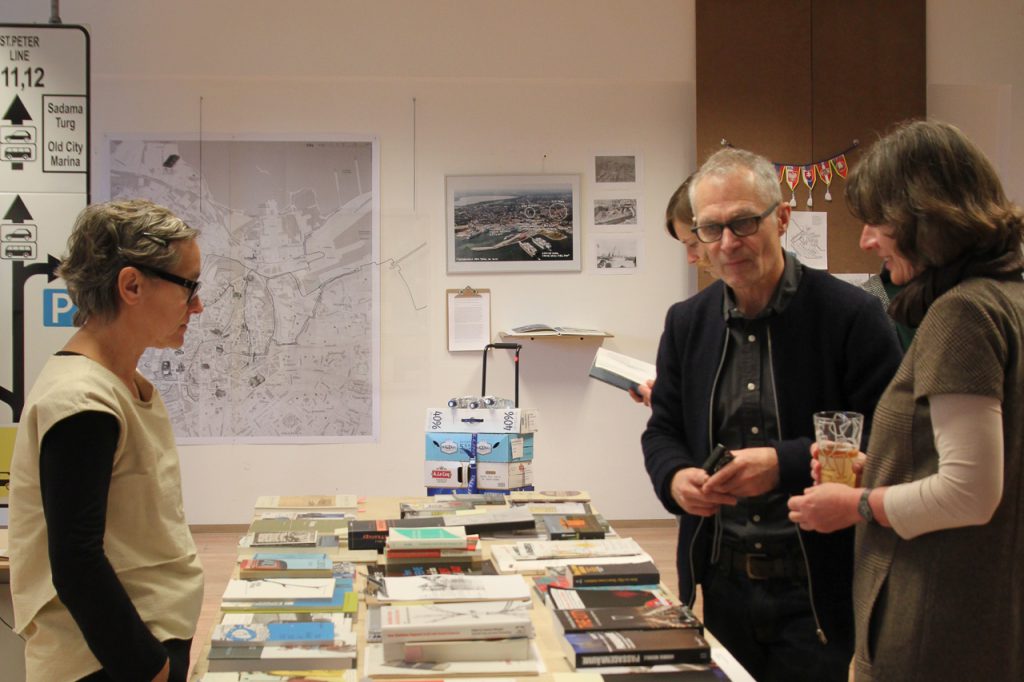 Conversations during the workshop in the main working space intended for testing and developing displays and cartographies, but also for offering a project library and mediathek to the public, December 2015

Nodes of Transformation and Transition

The conference and workshop will present and discuss both the theoretical framework and methods and the interim results developed during the current WWTF-funded research project Stop and Go – Nodes of Transformation and Transition. This interdisciplinary project is emphasizing on nodes and hubs of transnational mobilities and migration alongside the major Pan-European road corridors. When increasing numbers of people are obliged to spend increasing amounts of time in transit then transition nodes, hubs and terminals along their primary route – where exchange between the actors en route happens – acquire ever-greater significance. These nodes represent new forms of urbanity where both individual’s motives, routes and rhythms, routines and rituals, their appropriation of space, their modes of interaction within their multi-local existence, but also the effects of political transitions, urban transformations, and the policing and management of mobilities and migration can be explored.

The geographic scope of the project is a triangle between Vienna, Tallinn and the Turkish-Bulgarian Border, between 3 territories with contested geo-political histories and very different qualities of post-socialist transformation. A Ford Transit transporter van had served as a mobile laboratory for embedded field research, for collecting and transporting artifacts, while mapping workshops both in the academic field and in public space, and large-scale network installations on site triggered conversations to gain a variety of forms of knowledge from routes and stops, that had also been exhibited in the van and in institutions alongside the routes.

Finally in a special project space in a logistic hub located in a former Vienna railway station the interim results and proceedings are displayed as a networked “deep” cartography of routes and hubs, including also related projects by other artists and scholars that altogether display both supranational developments and the mobile individuals’ experiences but also the impact on each other and on the transformations of urban space. Stop and Go – Nodes of Transformation and Transition is a research project at the Academy of Fine Arts Vienna, Institute for Art Theory and Cultural Studies funded by Public Spaces in Transition – Call 2013 within the framework of the funding program ‘Social Sciences and Humanities in Vienna’ of WWTF Vienna Science and Technology Fund. Principal Investigators: Michael Hieslmair und Michael Zinganel International Partners: Emiliya Karaboeva, Department of Anthropology at Sofia University; Tarmo Pikner, Tallinn University, Estonian Institute of Humanities

18:00 Opening of the exhibition

18:30 Introduction and guided tour by Michael Zinganel and Michael Hieslmair, research associates at the Institute of Art History and Cultural Studies and head of research of the WWTF funded project Stop and Go.

10:00 Welcome by Andrea Braidt, deputy-director of the Academy of Fine Arts Vienna

10:00 to 16:00 A one day bus-excursion with local experts in and around Vienna to significant nodes of transnational mobility and migration: e.g. to the former border station to Hungary, logistic hubs at the margins of Vienna, like the harbour, the International Bus Terminal and more informal arrival points, to refugee accommodation centers, integration projects and points of registration of asylum seekers in Vienna.

Eva Engelbert and Alena Pfoser: video work about Narva and the Baltic border zones between Estonia and Russia

Vesselina Nikolaeva: photographic work about the border zones between Bulgaria and Turkey

Regina Bittner, Deputy director of Stiftung Bauhaus and head of the postgraduate program at Stiftung Bauhaus Dessau and lecturer at MA program at FH Anhalt. Regina Bittner is an urban anthropologist and an expert in multi-sited ethnography and various forms of its representation, she has a great experience in teaching international and interdisciplinary students in different formats. She had worked on transit spaces and transitional spaces.

Emiliya Karaboeva, historian, Department of Anthropology at Sofia University and Eindhoven University. She is the Bulgarian research partner of the current WWTF-funded research project STOP and GO. She works in the field of history of mobility and technology, especially on Bulgarian truck drivers from SOMAT, the only transnationally operating company during Socialist period of time, connecting the Middle East with Western Europe (and for whom logistic nodes in Vienna had represented the desirable first stop in the former West).

Nina Valerie Kolowratnik, Columbia University, GSAPP / Echoing Borders Initiative (with Nora Akawi from Studio Ammann) and Johannes Pointl, Department for Building Theory by Design, Faculty of Architecture, Vienna University of Technologyy, their recent project “Fluchtraum Österreich. Räumliche Manifestation gegenwärtiger Asylpolitik” (with Herbert Langthaler from asylkoordination österreich) based on works with students at TU Vienna is a brilliant example of mapping both the individuals experience and the management of migration including different scales and both spatial and temporal aspects.

Tarmo Pikner, human geographer, researcher at the Centre for Landscape and Culture, Estonian Institute of Humanities, Tallinn University, He is the She is the Estonian research partner of the current WWTF-funded research project STOP and GO. He works e.g. about urban commons, ethnographies of trans-boundary infrastructure, and spacing of time and the effects on urban waterfronts.